Most of us are familiar with the tale of The Pied Piper; the piper is hired by the rat-infested town of Hamelin to lure away the creatures with his mystical flute, the citizens refuse to pay a fair price for the piper’s service, so in an act of spite and revenge he lures all of the children of the town with his pipe, and leads them away, never to be seen again. If, like me, you were told the tale as a child you’re probably, like me, a little bit traumatised by it. The thought of hundreds of children being lead into the unknown by a strange jester-like man in multicoloured clothing was enough to give me nightmares, the rats didn’t help either.

The tale’s origin dates back to the 13th and 14th century, a manuscript from from the year 1440 states “In the year of 1284, on June 26…a piper, clothed in many kinds of colours, (there were) 130 children born in Hamelin were seduced, and lost at the place of execution near the hill.” If this doesn’t make it even more unnerving, I don’t know what will…apart from the multiple theories over what the Pied Piper symbolises, many believe the piper is a symbol of death, the devil, or the plague itself.

There have been countless adaptations of the story, Brothers Grimm fittingly included the tale in their collection, Deutsche Sagen, first published in 1816. It’s been adapted to film many times, with the first adaptation in 1933 – an animated short film produced by Walt Disney Productions.

One slightly lesser known film adaptation of the story would  be the 1972 film, The Pied Piper, directed by French film-maker Jacques Demy, best known for the musical The Umbrellas of Cherbourg. The film stars iconic 60’s folk-rock flower-child Donovan as the pied piper, who fits the role exceptionally well. Donovan also composed the soundtrack and takes to his colourful guitar to sing a couple of songs here and there throughout the film. The legendary John Hurt also appears in the film, as does Donald Pleasance.

A particular scene sticks out more than any  other; before Donovan lures all of the town’s children to oblivion, he lures their rats. The scene shows hundreds of rats following pipe-playing Donovan through the dark and dingy medieval town of Hamelin, the haunting melody of the flute builds up to a climatic orchestral finish that is equally unnerving and enthralling.

You almost expect Jethro Tull/Ian Anderson to come out of the shadows and join Donovan (hopping on one leg of course) with his magical flute-playing. A remake starring Ian Anderson as the Pied Piper…now that’s something I’d really like to see.

The ‘rat scene’ is strange and disturbing in that classic folk-horror way, no gore or outright ‘scary’ moments are needed, instead the reminiscence and subtle representation of superstition, folklore and an eerie rural geographical location is enough to make the viewer squirm in their seat. Arguably, what makes folk-horror one of the most effective genres in horror is that element of truth. A real-life legend from the real-life town of Hamelin, Germany – manuscripts dating back hundreds of years mention the pied-piper, we have no way of knowing whether he existed and whether all of the town’s children went missing or not, it’s that not knowing that makes it equally effective and disturbing. The film could easily be compared to other ’70s folk-horror’s, most obviously The Wicker Man, but there are also similarities to Witchfinder General – particularly that ‘element of truth’, and Blood on Satan’s Claw.

Jacques Demy doesn’t leave his theatre and musical influences behind for The Pied Piper, the costumes are exaggerated and generally obscure, emphasising Hamelin as a fantastical fairy-tale town with a clear distinction between the ‘goodies’ and the ‘baddies’. Saying that, traditionally the piper is portrayed as a colourful flamboyant character dressed in multicoloured clothing, however Donovan’s Pied Piper is dressed relatively dull and drab throughout the film – Demy portrays him as a beggar, wearing rags. 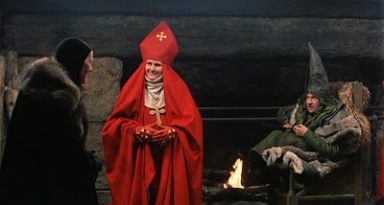 The film ends with the Pied Piper leading the children through the village and across the fields outside of the town at the crack of dawn. The children, all wearing white – connoting and magnifying their innocence and naivety, follow Donovan in a happy haze, mindlessly singing along to his tune. Without hesitation, there is a jump-cut and as soon as they were there, the children and Donovan are gone. The music stops and all is silent. An eerie end to an equally eerie film.

The Pied Piper never gained much critical acclaim, and still to this day is not generally well known. I struggle to see why it isn’t up there with other folk-horor cult classics such as The Wicker Man and Witchfinder General. 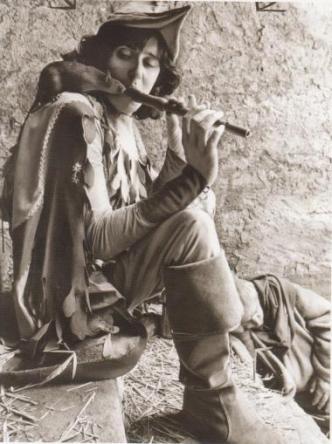