A sign by the door immediately grabs my attention, it reads “Astral folk this way –> Comedy that way<–” A tough choice, but tonight I’m here for the astral folk. The event is being held in the drawing room upstairs, a small and homely dimly-lit space that almost feels like somebody’s living room. It’s a sold-out show and the venue is filling up quickly, everyone is huddled around waiting eagerly for the first act.

Dan Davies, organiser of the event and bass player for  fuzzy folky psychedelic rock outfit, Wolf People, opens the evening with a selection of acoustic songs, including “Kites”, “Magpie Song” and “Black Swan Blues”. Away from the group, this ‘lone wolf’ solo-set highlights Dan’s capabilities as a multi talented singer-songwriter with strong folk-rock influences.

Next up, a last minute yet delightful addition to the line-up, Alisha Sufit, of illustrious acid-folk meets indo-prog band, Magic Carpet, plays a handful of whimsical songs on acoustic guitar; her voice penetrates every corner of the room, leaving the audience in a stunned silence after ever lilting warble, only the occasional creak of the Victorian wooden floorboards fill the pause between songs, before a wave of applause for the gifted folkstress. Sufit’s ethereal vocals could give the likes of Joni Mitchell or Linda Perhacs a run for their money, a prime example of enchanting femme folk that’ll make the hairs on the back of your neck stand on end.

A gap in the curtain reveals the street below, an autumnal scene, the rain blurs and distorts the reflection from the street lamps like a kaleidoscopic lens, accentuating the atmosphere of warmth and amiability in the room. The Betsey Trotwood is the perfect venue to host an evening of psychedelic freaky folk, a twee Victorian three-storey pub in Clerkenwell, it’s an intimate and charming set up, reminiscent of the days when bustling folk clubs were most prevalent – if you ignore the odd phone ping, buzz, or flash, it could almost be 1973. 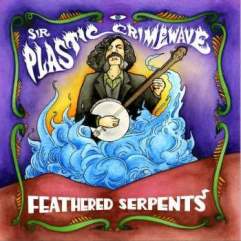 Succeeding Sufit, Steven Krakow (Sir Plastic Crimewave) appears, featuring Sara Gossett on flute; hailing all the way from Chicago, U.S.A. This is the last show of their U.K./Euro extravaganza – having travelled all over the place, from Brighton, to Birmingham, to Milan, throughout September touring Feathered Serpents, Steven’s first solo LP, recorded over a span of 15 years and featuring a spectacular array of musicians from Fairport founding member Judy Dyble, and Kaleidoscope’s Peter Daltrey, to Comus members Bobbie and Jon Seagroatt (available now on Sunstone Records.)

A poem from the album is recited by the ‘resident shaman’, (Peter Daltrey, who originally read it out couldn’t be there as he was “off doing psychedelic things.”) But the ‘resident shaman’ (Matthew Shaw) does an excellent job. I haven’t missed out on the comedy completely this evening, as Sara and Steven bring their own comedic American charm to the set, commenting on the funny names of our English beers, most notably ‘Bishop’s Finger’, which receives a chuckle and a cheer from the crowd. The dreamy mix of Sara’s spellbinding flute playing and the distinctive droning sound of Steven’s guitar and vocals makes for a Day-Glo display of out-of-this-world astral folk. A magical last gig of their tour.

Lastly, a rare performance from Mark Fry & Friends, who open with a combination of verses from the psychedelic folk masterpiece and highly sought after LP, Dreaming With Alice (1972), recorded in Italy when Mark was just 19. An album close to my heart and one I’ve spent many an hour listening to, it’s an absolute delight to see a few songs from it performed right before my eyes for the first time. Of course I’m going to be a little biased, but it is truly sublime.

Accompanied by thumping double-bass and rhythmic bongos, an approving sprinkle of folk-funk is added to the acid-folk exhibit. The order of the set has been well thought out, one song from Dreaming With Alice and then a few contemporary tracks, a pattern that combines both new and old smoothly, adding a timeless fluidity to the concert. With “Down Narrow Streets” and perhaps one of the most infamous tracks from the album, “The Witch”, which Mark states was the result of the paranoid tail-end of an acid trip, among the oldies. A personal favourite from the gig is “Dials For Home”, from Mark’s latest album, South Wind, Clear Sky (2014), a transcendental halcyon song that holds onto a dream-like astronomical theme, and the perfect track to end the evening with.

Overall, a highly successful evening of intergalactic astral-folk and a haven of freaky folky psychedelia that exceeded all of my expectations!