Lake Ruth aren’t the first band to evoke those neon nights when our need for affection, or connection, grips deepest. But this New York act, formed in 2015 by Hewson Chen, lends its own twist to rock’s long and heartsore history.

Key to their sound is vocalist Allison Brice, whose giddy girlish voice plays much on your mind. Brice evokes a sense of sweet sorrow, as all around her gleams with a dayglo poppiness. And check out those lyrics. We visit one tormented mind after another on this album, yet Brice warbles playfully as if describing a childhood picnic.

The variance between the words and music is partly what makes Lake Ruth such a curiosity. You sense they could write heavenly hits, yet few of their songs here fit a convenient verse-chorus pattern. Nor do Brice’s vocals make it easy to pick up the threads of each track, leaving you to partly add in your own narratives. 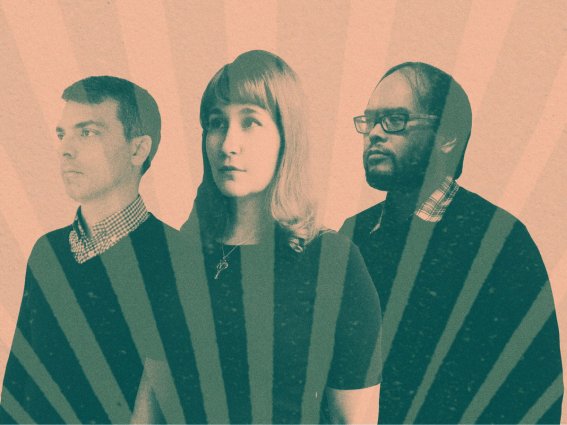 A shimmering sheet of sound opens “VV” with a clear nod to Cocteau Twins, Lush, or Canadian pop dreamers, Stars. Mmm, maybe even The Chromatics as well, looking to kill for love and desire. But there’s subversion afoot too, with Brice sighing, ‘The dance of the rich/Never pleases the poor’.

This theme of the outsider against society runs like a tendril through ‘Birds Of America’. “Julia’s Call” follows someone on the run, maybe a witness, as waltzy keyboards conjure the illusion of a fairground maze. “One Of Your Own” brings a world of synth-driven fuzz, in which we find ‘cruel deceit upon the evening/thick foreboding in the air’. Another shadowy mission is evoked on “The Cross Of Lorraine” with its tense mix of urgent and languid riffs.

The band flexes out on “Radiant City” to offer a nifty jazzy vibe and bobbing bass notes. Then a mellotron mist gives the pagan poetry of “Under The Waning Moon” a filmic backdrop. But it’s the psych strumming on “White Wall” and “Walter And The Taxi” that betrays Lake Ruth’s trippy heart at last, as this absorbing album draws to a close.

The cover artwork, you should know, is a detail from Alan Mills Jr’s painting, ‘The Birth Of Socialism’. Maybe in its obvious sympathy for the marginalised, ‘Birds Of America’ is a musical response to this artwork. For rarely has the revolution sounded so seductive.

Back on @sohoradio tomorrow 6-7pm 🖤
HBD Francoise 🎂
In the run-up to the release of MOOF issue 10 we’ll be sharing some content sneak peaks over the next few weeks 👀✨ first up our ‘Psyched To Meet You’ interview with actor/comedian/musician/vampire 🧛‍♀️ Matt Berry. Head to the link in our bio to pre-order now (worldwide shipping available) 🖤 artwork by the talented @nikgernert
A few things we played on Sunday’s MOOF radio show✨ available to listen on Mixcloud now. Link in bio! https://www.mixcloud.com/sohoradio/moof-magazine-09012022/
The first MOOF radio show of 2022 is on @sohoradio today 6-7pm ✌️ tune in, drop out (or listen later on our Mixcloud)💖
Don’t forget to pre-order MOOF issue #10! Featuring 60+ pages of exclusive articles and interviews on underground music, art and culture. ✨ each copy comes with a limited edition postcard (pictured) by Berlin based graphic artist @rknwdrp LINK IN BIO 🍄 worldwide shipping available