The Hare and Hoofe

To celebrate one hundred issues of the much-loved Shindig! Magazine, madcap minstrels The Hare and Hoofe took to the best occult rock bar in London town, Helgi’s.

Playing a range of tracks from their self-titled double LP of 2018, Tom ‘The Master’ Hodges flitted between keyboard, flute, guitar and vocals, with Jim ‘The Hare’ Hargreaves on guitar and lead vocals,  Stuart ‘The Hoofe’ Perry on guitar, Jamie ‘The Wanderer’ Owen  on drums, and Kate ‘The Maiden’ Hodges on bass and vocals.

The Hare, The Hoofe, The Master and The Maiden proceeded on with the H. G. Wells headbanger I Was A Scientist (1892), a synth-y garage rock number from the perspective of a scientist who appears to defy all concepts of space and time. The band continued their intergalactic musical wanderings with Hoofe hit Voyager, which I’m sure zapped any unknowing bystanders far into outer space, in the best of ways.

With the Invicta flag proudly on display and microphones covered in ivy, the white horse of Kent watched on. Presenting a perfect mix of quirky English ‘wyrdness’ and futuristic psychedelia, the band who hail from Folkestone and surrounding areas certainly brought a bit of acid to Arcadia that evening. 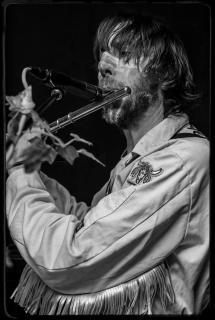 As purveyors of wyrd psych should, the band also showcased new songs Ants Vs Men and Bird Beak Feather, hopefully to be found on their forthcoming album. Towards the end of the show, Kate (The Maiden) and Jim (The Hare) descended into the audience with thumping bass and thrashing electric guitar, moving in and out of the crowd, finishing with a fierce guitar shred off. For a venue without a stage, the band held an extremely strong stage presence.

Drawing inspiration from all corners of the musicsphere, The Hare and Hoofe maintain a distinctive blend of cosmic progressive rock, sweet shop glam and folky Fairport pastoralism. With songs about fine young maidens and time-travelling scientists what more could you want? The Hare and Hoofe aren’t just fantastic musicians, but story-tellers too.

Despite a bleeding hand from drummer Jim (The Wanderer), the audience came quickly to the rescue with plasters and the band finished the set with a bang, blasting the hard and fuzzy Terror of Melton. Of course, February 29th marks the Leap Year, a rare occurrence in the Gregorian calendar which only happens every four years. The Hare and Hoofe are certainly a rare breed of band and one we’ll hopefully catch again soon, we can’t wait another four years. MOOF love the Hoofe!

All in all, a superb shindig and a perfect way to celebrate the mag’s centenary. After the gig, Shindig! DJ’s Jon ‘Mojo’ Mills, Paul Osborne and Alasdair C Mitchell spun an array of heavy-psych, prog and rock through to the early hours. Congratulations to Shindig! Magazine on their 100th publication, here’s to 100 more. 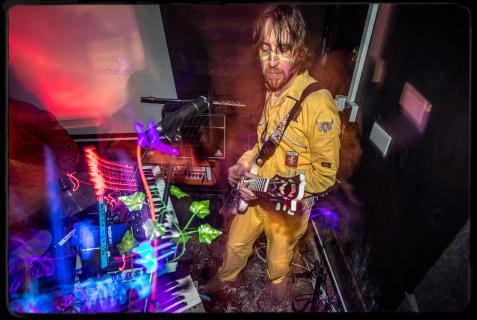 A few things we played on last night’s radio show, now available to listen on Mixcloud. Link in bio ✨
We'll be selling MOOF mugs, tote bags, badges, and a few rare out of print back issues at @signaturebrewe8 this Thursday as part of @artandcraftldn (lots of other artists’ amazing work available too)🍻 🎨 don't miss our DJ set! Free entry 🎶
The @moofmag radio show is back on @sohoradio this evening from 6-7pm ✨ listen live or later on our Mixcloud
Submissions for MOOF issue #10 are now open 🌿
RIP Michael Chapman… what a legend!
If you missed @melanie.angela ‘s mix on @sohoradio yesterday evening, you can listen on Mixcloud 🌝link in bio